You Only Get What You Expect 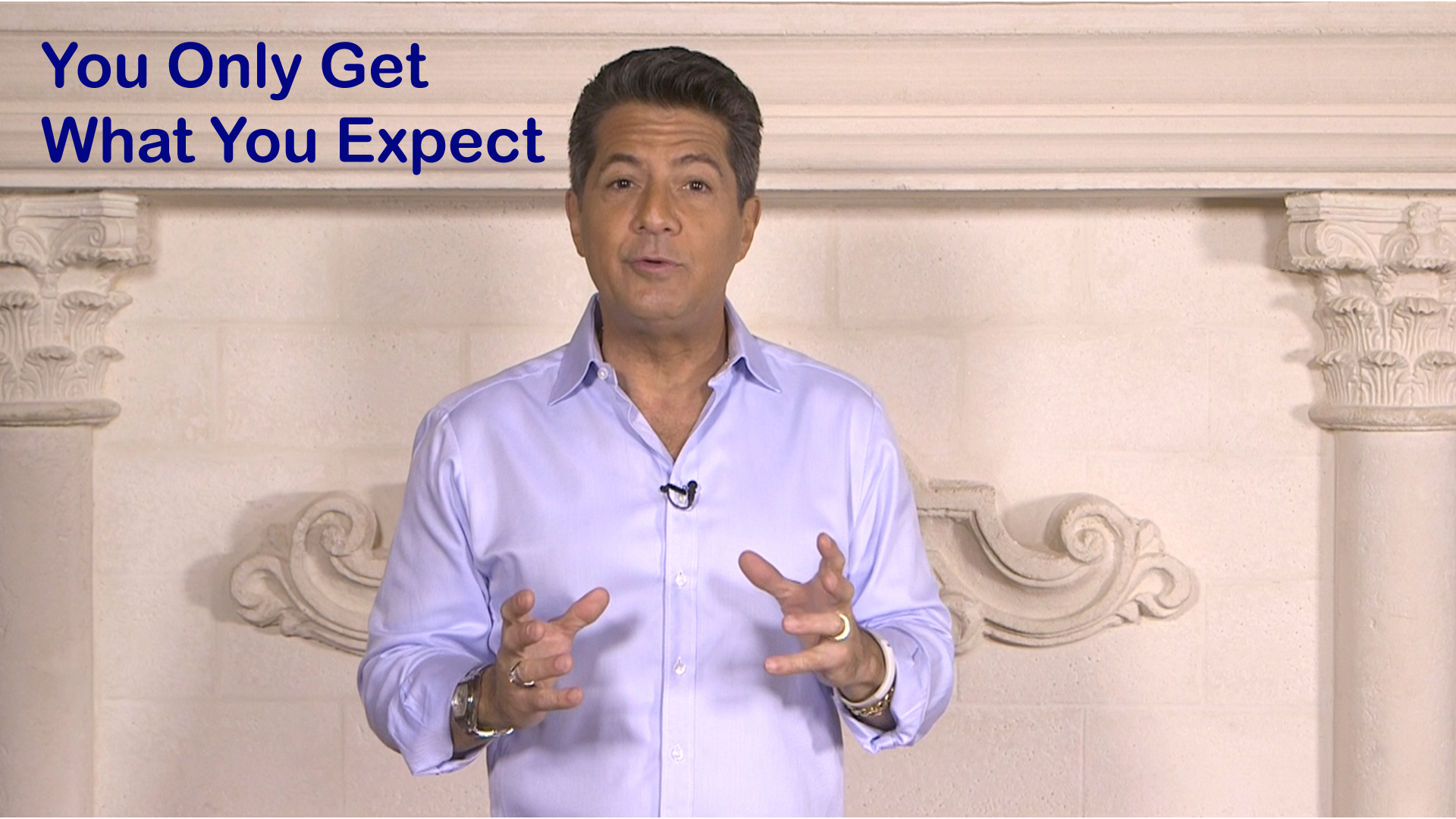 Hi this is Carlos, Amazon‘s number one best-selling author and creator of this show! Welcome to Your Unlimited Life. This show is dedicated to helping you understand the unlimited potential that you have within you! By using it, you’ll be tapping into your true potential. Tapping into that power that you have within you, in order to create the life of your dreams, to be free, to be doing have whatever it is that you want. I firmly believe that you have the potential. You have the ability within you to do this. You just need to tap into that power that’s already resonant within you, and utilize it to create the life of your dreams. Part of this begins with your mindset. You have to develop the mindset of the person who already is, has, and does what you want.

I gave you that quick review of last week because there’s another factor that’s very important in order for you to be “motivated” right? The additional factor that must also be present aside from the dream, the vision, the ambition is you must have the expectancy of achieving that dream, that ambition, and that vision. In other words, you have to believe that somehow you’re going to get it. You have to believe that this is something that belongs to you and that you can either develop the ability or figure out the way to get it. My friend and long-time mentor Dennis Waitley always said in his talks, “In life, you will never get what you want. Never, ever, ever, ever, ever get what you want out of life. But in life you always get what you expect.” The dream is huge. The dream is important. The vision is critical, but you have to develop the sense of expectancy. It has to be real to you. You have to set the intention that you are going to have it. You must have faith that you can get it. There’s a big difference between people that wind up being the winners in life, the successful people, and the people who wind up being the have-nots, the failures, the people that wallow in mediocrity.

Here’s the difference, the difference is that when somebody who is accustom to failing, sees someone with a dream or a big vision in front of them, and they’ll usually look at it and say, “Oh, sure, he can do that because he has this, and this, and this. He has the education, he has the looks, he has the money, he has the time, he has the wife, he has the job, he has the whatever.” Do you understand? They look at it from a standpoint  where “they have it so they can do it, but I don’t have it so I can’t.” Now, the winner on the other hand, looks at things and says, “You know what I need to acquire this ability, this skill. I may not have the education. I may not have this or that or the other thing, but I’ll acquire it. I’ll put in the time. I’ll get it. I’ll do it. I’ll acquire that skill. I’ll acquire that knowledge.” That difference is that expectancy. It’s like a muscle, I mean all this mindset stuff is really like a muscle. It’s what you’ve been accustomed to for so long in your life.

Expectation on the other hand, converts want into intention. It’s an internal belief that you can actualize the thing that you want. It’s a faith, if you will. A faith that what you desire is yours, and you intend to get it. This belief is what drives action. This is what causes you to move forward. This is what causes you to expand. Without this belief, without this expectancy, there is no action.

I must go back and reiterate this, because it’s critically important that you understand this: motivation is about taking action on a motive, right? The word means “motive action.” It’s taking action on a motive. Without the motive, there is no action. If you don’t believe, you don’t act, right? First you must have a compelling dream then you have to build belief, you must build expectancy. You’ve got to feel it; you have to feel it in your bones. It can’t just be a head thing. You’ve got to feel it in your body, in your whole being.

One of the ways that you achieve this expectancy, is to begin looking at the accomplishment of this dream, this vision, this ambition that you have, and you start playing with it. You begin mentally contemplating it, and you start going, “Okay, when I accomplish this, when I get this, what benefits I’m I going to get? For example, one of the things that motivated me, and became my moving, driving dream, was becoming a millionaire. I always wanted to get rich, but never quantified it well enough. Eventually one day, I met a guy. He became my mentor, he became a millionaire in two and a half years. I may have told you the story before, but it’ll sound a little bit different this time. This guy said that the reason that he was where he was, the reason he’d become a millionaire in under three years, is because he had sold out to his dream. He had become totally committed. He burned his boats, if you will.
I realized I hadn’t. He was saying that’s the reason that we were sitting in the audience broke, and he was sitting on the stage speaking as a millionaire. That day, I decided that I was going to get 100% committed to my dream. Now, it’s easy to say 100% committed, people say, “Oh yeah, I made the decision,” or, “Yeah, I’m committed.” But see, commitment implies that you understand clearly as to why you’re pursing this. I wanted to be a millionaire, that was my goal, what was my vie for doing it? This is when you start contemplating what it is that you really want. You have to get really clear about the benefits that it will provide for you as well as the benefits it will provide for your loved ones.

What does being a millionaire imply, or what’s it going to do for me? It means I can buy the home of my dreams (which at that point was a 6000 square foot house on a couple of acres.) It will imply that I could drive my dream car (which at that time was a BMW 7 series.) It implied that I could fly first class with my wife, with my kids. I could home school my children. I could be a full time dad (I had little girls at that time. So it was the ability to take them to ballet or to their activities). I could share time with them and they could travel with me (because since they were home schooled, they could go whenever to whatever places I was traveling to.) To me it was a lifestyle that implied freedom and those benefits were so huge, they turned me on so much, so much that I became a 1,000% committed. It’s commitment that converts wanting into intending. That is what drives expectancy. That is what creates expectancy.

Here’s what I want you to do. With new year’s coming up. (I’m not going to say of what year because this video is going to go on into perpetuity and it’s going to be a best seller.) New years are symbolic! Your new year can start whenever you want it to. If you’re watching this video in the future and it’s June, your year can start anew right now. It’s only a matter of a decision. For those of you watching right now, there’s a new year approaching. I have something for you. A small but exceptionally useful exercise. I want you to get clarity of your vision and then build belief in preparation for the new year, that’s the key. Don’t wait till it’s upon you.  Get clarity of  your vision and build belief. Here’s what I want you to do. Imagine that it’s December 31st, not of this year, but December 31st of next year. So it is over a year in the future right now. You’re sitting there on December 31st of next year and you’re looking back over the past 12 months. Maybe you and I are having a conversation. You’re looking back over the past 12 months, and I want you to think about this and I want you to write this down. What has to have happened? What has to have happened over the past 12 months both in your personal life, in your family life, in your business life for you to be happy with the results that you’ve gotten?

Ladies and Gentlemen, this is the number one ability to develop. If you want to have huge success, the number one ability (because it truly is an ability ) is that you must use it. You have to work with it. Defining, expanding your vision, and building expectancy in belief is the key to achievement, because it is the motive that will drive your action. You magnify the vision , you increase the expectancy, and the fate. Bottom-line is, you’ve got to fall in love with your dream, and your vision, and then fall in love with the benefits behind it.  In the next two shows I’m going to teach you a couple of other very important strategies also associated to motivation. I’ll talk about how to sustain your motivation (because most people fail for lack of motivation. They don’t take action, they don’t have a motive.) I’ll teach you how to do this. (How to sustain motivation in the next show, and then how to amplify and magnify it in the one after that.) You are going to be an expert before this new year. You are going to be really motivated going into this new year. Share this program with five people that you love. Help your peeps out! Share this program with five people that you love so they can take their life to another level. Share my Youtube channel. Youtube.com/CarlosMarinTV . You can see all the videos there. All of the Live Your Unlimited Life shows are there. Join me on my mission! I believe that everyone, and that means you, have unlimited potential. You can be, do, and have anything that you want. Help me in my mission to empower millions of people all over the world to know their inner power, their greatness that’s already there. It already exists. Use it to be free and live your ideal life.

I’m going public with a new goal that I have starting now, and that is that over the course of the next seven years, I’m going to help one million people, directly or indirectly, become millionaires by the year 2021. Now that doesn’t mean if you start now, you got to wait seven years. We can do this in a couple of years, but there’s going to be people down the road that are going to be touched by you, and by me, and by some of these things that we’re going to do. The goal is one million millionaires by 2021. Join me in that mission. Let’s make a difference in this world. Until next week, God bless you, and live your unlimited life.

Awsome, work and expect not want