How to Create Your Own Luck! 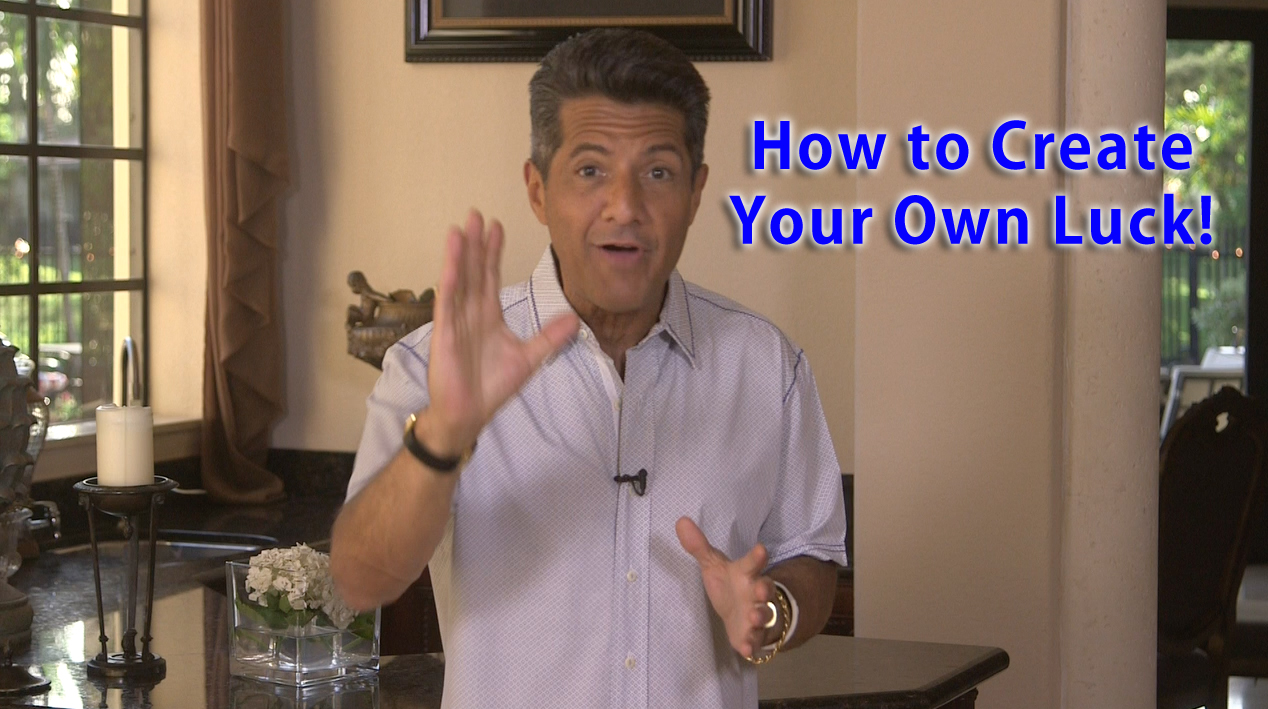 Welcome to Your Unlimited Life. I’m Carlos Marin, author of The Ultimate Success Formula, and it never ceases to amaze me how many people believe that luck is the key to success. I mean, seriously? I was talking to a guy the other day and he’s talking about so-and-so, another guy that we know, and how lucky he was to have had the success he had in business. Mind you, I’m sitting there thinking to myself, “What a load of crap. No wonder you’re frustrated in your life, and with your business, and the stuff that you do. You’re sitting there focused, thinking that luck has everything to do with everything.” Luck is when opportunity and preparation meet, my friends.

Let me tell you something, there is a psychology, and a mindset  behind major success. That mindset starts with, “If anybody else can do something, if anybody else can have success doing something, then I can too. If I learn the mindset that same person has learned and duplicate it, if I learn the strategies that person has utilized and duplicate it, I can succeed even further.” Successful people, they have this mindset, “If it’s to be, it’ up to me.” They have this mindset that says, “I believe in myself. I can learn anything. If I don’t know a skill, if I don’t have a skill, if I don’t know how to do something, but I want to achieve something I will learn it. I will devote myself. I will master the process, I will master the ability, I will master the capacity, and I will get it done with excellence.”

Super successful people believe in themselves. They have developed the habit of confidence. They’ve developed the habit of facing fear. Fear is what stops us from accomplishing tasks. Successful people have learned to look fear in the face and say, “I’m doing it anyway. I’m afraid, but I’m doing it anyways.” They generate the courage to face fear and take action anyways. In one of the first books on personal development I ever read, doctor David Schwartz, The Magic of Thinking Big, he says that there is a cure for fear. It’s called action. Action cures fear.

Successful people develop courage. They know that the courage they generate will get them to take the actions they need to take repeatedly in order to develop the capacity to achieve whatever it is they want. Then that increased capacity, and that increased stability increases their confidence. That confidence gets them driving forward to a higher level of commitment.

You must understand something ladies and gentlemen, successful people believe that they create their own success. Now, I don’t mean that there aren’t other team members and team players, because the successful people are usually very good leaders as well. One of their beliefs is, “I lead by my example.” They believe, “I’m going to play this game until I win, because I didn’t come here to try. I came here with the commitment to do, I’m going to stay committed and I’m going to keep doing until I win the game.”

Intention is a very powerful force. There are a lot of principles, as you obviously know. I’ve written a book about success, The Ultimate Success Formula, and I have a program called The Unlimited Success Academy, so success is my topic. I work with entrepreneurs. I work with business people all the time and I’ve studied this thing called success. These successful people have a certain mindset and a certain belief system that says, “I’m here and I’m going to play this game until I win. I’m going to learn whatever I need to learn, and I’m going to correct every course, and I’m committed to doing it. I’m not here to try to see if it’ll work or not work. I’m here to make it happen.” There are many other success principles along the way that they utilize, but that mindset, psychology and attitude of, “I’m here to win. I’m here to get it done. There is no quitting, there is no giving up” is what separates them from the rest. As Winston Churchill said, “Never, never, never, never, never quit. Never quit. Quitters never win and winners never quit.”

That’s the mindset, the attitude, the thinking and the psychology that you must have in order to make it happen. Believe in yourself. Just know that anything anybody else has done, you can do too if you just learn what they did. Learn their mindset, learn their strategies. Learn from those who have gone before you, and apply what they’ve done to get the success that you’re looking for.

Remember, you are unlimited potential. You have the ability within you to achieve anything that you want. Again, you just got to develop the mindset, and use the strategies of the person who already has what you want.

Share this show with five people who you love, five people who you want to see succeed. Join our online community to empower millions of people around the world to know their inner power, greatness, and use it to be free and live their highest vision in life.

Until next week, God bless, and live your unlimited life!

as usual great show and teaching, than you, I am learning and growing.