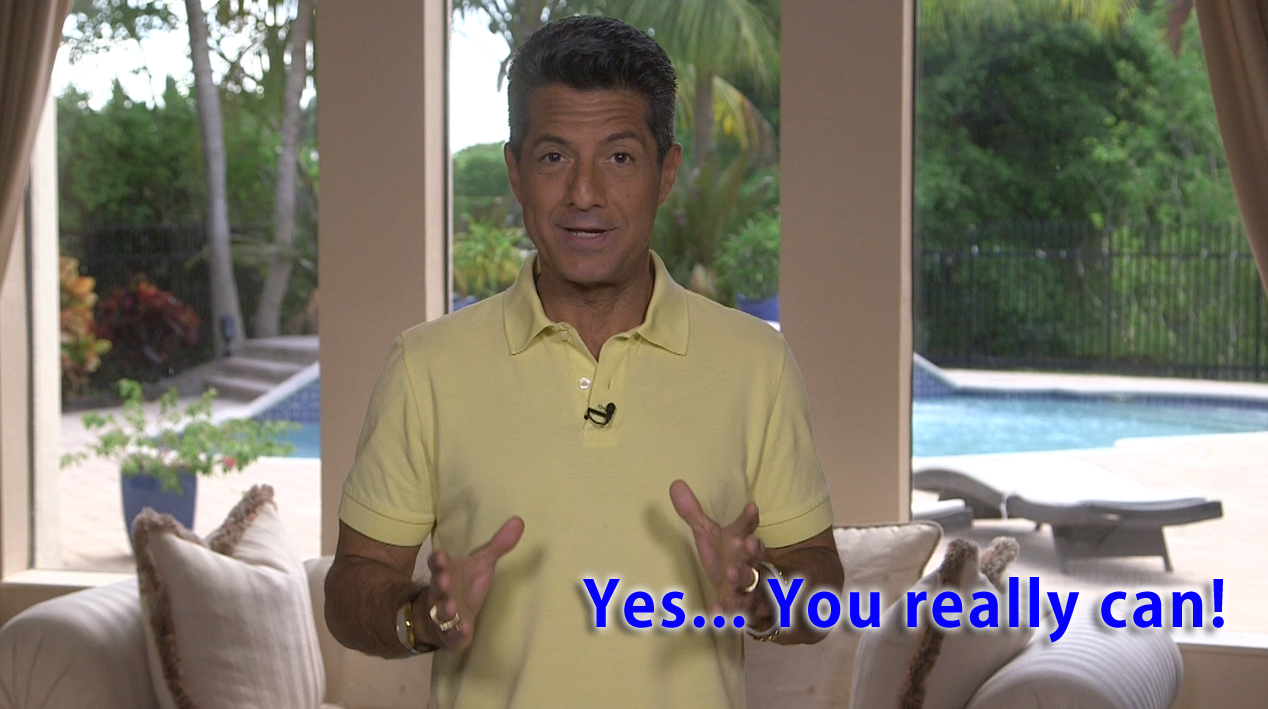 Welcome to Your Unlimited Life! I’m Carlos Marin, author of The Ultimate Success Formula, and today I’m going to talk about a question that I’ve been continually asked over the past 30 years, 20 years, 10 years, I mean, it still happens right now! That question is this: Can anyone achieve success and wealth?
“I mean, I know you can, Carlos, because you’ve done it, but can anyone? I mean, this principles that you teach, this laws that you teach in The Ultimate Success Formula, will they work for anybody regardless of where they come from, regardless of their background, regardless of how low a place they started from in life?”

I need to remind you of something, this applies whether you may be new to watching my shows or you may have been following me for a long time.

I had to learn to get tough. There weren’t a lot of Cubans in Charleston, West Virginia. I had to learn to fight, I had to learn to defend myself, to stand up for myself, and it wasn’t easy. My mom and dad both worked two jobs just to make ends meet. The first four or five years we were raised by an American babysitter, so we forgot our Spanish. That’s how we began. When I was young, if I wanted the 10-speed bike that my friends had, I had to mow lawns and wash cars for it. If I wanted the cool “Nik Nik “shirts in high school or the Mayfair jeans or anything beyond the staples (the clothes for school and the clothes for church) anything beyond that I had to buy myself.

I had to learn how to work at very, very young age. As I started working, what I learned was very good work ethic, and I learned how to work 60 hours a week then 70 hours a week, then 80 hours a week. I learned how to work my butt off! That’s what I knew how to do when I was 25, frustrated and looking for a way out, looking for a way to become wealthy, and had no answers. I started at the same place that anyone else starts, other than the privileged few. I started broke, I started frustrated, I started with no answers. But see, I wanted to succeed so badly that I eventually found some mentors. I had experienced enough pain for myself that I reached a point where I was willing to listen. I sought mentors who had the fruit on the tree, people that were already millionaires willing to share their secrets. I then learned some principles of success, as well as the laws of the universe that govern success.

Most people don’t realize this but you must go outside of school to look for this. They don’t teach this stuff in school. The only place in school you might learn a little bit about this is if you played sports, because in sports they teach you some of these success principles. Other than that, it hardly exist in school. Now, I sought out these men, as well as these principles and I started applying them to my life. It was tough at first because I had a victim mentality. I looked outside, every place on the outside, for the reason why I wasn’t where I wanted to be and I was pointing and blaming at outside situations, outside circumstances, for my lack of success. These mentors said to me, “Carlos, you have to learn. You have to be 100% responsible for your success, for your results and your life. Until you do that, you’re just going to meet with all kinds of frustration and failure.” I had to take responsibility for my own life, which I began to do. Then they said, “Carlos, you need to get a big dream.  You must define exactly what it is that you want out of life, because if you don’t have a big dream, if you don’t have a big why, you won’t have the drive. You won’t have the intensity to put forth the effort to get anywhere.” I had to get a big dream, then, I waffled around for a while after having this dream because I didn’t know anything about commitment. Then I had to get totally committed. I had to sell out to my dream and go after it 125% day in and day out.

When everything wasn’t going the way it still should be going, I had to do a deeper soul-searching. I had to figure out what beliefs I had, what things I had, what bad habits did I have that were blocking my success. What were my blocks? What was the cause of my self-sabotage? What was the cause of my procrastination? I had to dial up my dream higher, I had to dial up my commitment higher, and I had to change my limiting beliefs. I had to realize that to be responsible for my life, I also had to be responsible for what was inside my head. I had to be responsible for the beliefs that I had and the beliefs that were keeping me back from having the success that I wanted. I changed limiting beliefs, I got rid of blocks, and then I had to get a very tight, precise, correct plan of action. Mind you, it wasn’t perfect in the beginning, but it was a plan of action that I started taking massive correct action on.

By the way, if you’ve read my book, is any of this sounding familiar to you? Is any of this ringing a bell? It’s only the Ultimate Success Formula applied to my life. It’s exactly what I did to achieve the success that I achieved. Then after getting that plan of action and massive, massive correct action, I learned how to be it. I learned how to act as if I already was the person that had what I wanted, that did what I wanted to do, and I acted as that person. That’s the “be it” principle from the book. I’m just a product of what I’m teaching you. I started from nothing and I achieved wealth, success, riches, and happiness by applying the principles in my book. I followed a system and I found mentors, which were the two additional steps of the Ultimate Success Formula. Now, you may say, “Well, Carlos that’s great. It worked for you but how about for other people?”

I can tell you story after story after story, like one guy that defected from communist Cuba in Spain when he was a young man, met a gal, got married, and came to the United States. I met him in one of my businesses. He was a paint truck driver for Glidden Paints. Our business opened up in Spain, he decided to move back to Spain, he followed the principles, he followed the system, he learned to get out of his own way, he followed the steps consciously or unconsciously in the Ultimate Success Formula, became a multi, multi, multi-millionaire within a period of five or six years. A young actress from Mexico who was so broke, she had no car. She had to go to presentations with all of her materials and presentation equipment and things on buses. Have you ever been on a crowded bus in Mexico? Today, she’s a multi-millionaire. She applied the principles and she is one of the biggest people in the network-marketing world. Another young man who came to one of my events two, three years ago who was a manager for a hardware store, a Lowes Hardware store, and that store was the 97th one in the state where he lived, which means the last one, doing about $900,000 in annual sales. He went to one of my events and he started applying the principles into his life. In the period of 18 months, he took that store from number 97 to number one in the state going from $900,000 in sales to $10.8 million in sales in just 18 months.

Ladies and gentlemen, these principles work, and they work for anyone who learns them and applies them. What I’m here to tell you is that if I can do it, you can do it. These principles work for anyone! I do believe that anyone can achieve success, wealth, happiness, or anything that you desire, if you just learn the principles required to do so and apply them in your life. Take this show and share it with five people that you love, five people that you care about. Let them understand, see and know that anyone can have success. Anyone can apply these principles and enjoy the success that they want in life.

If you haven’t gotten my book yet, right now I’m running a special promotion where you can get the book for free, if you just pay $6.95 shipping and handling cost and get the book absolutely for free. Just click here http://theultimatesuccessformulabook.com which will take you to the page where you can get the book. Share this show with five people, share the love and join my community. Let’s help transform the lives of millions of people around the world.
Until next week, God bless and live your unlimited life!

Hello Carlos i just watched your video, thank you for your encouraging storie, so grateful to hear it.