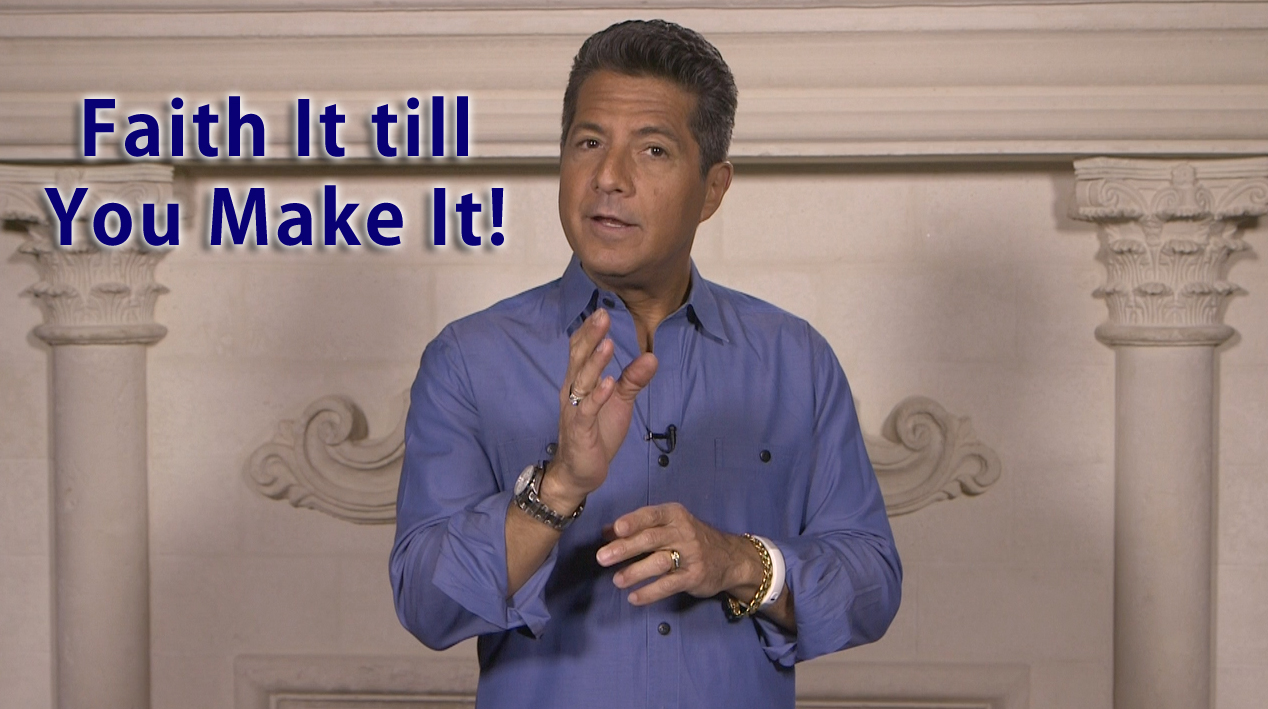 Welcome to Your Unlimited Life. I’m Carlos Marin, author of The Ultimate Success Formula and founder of The Unlimited Success Academy. I want you to understand that my purpose and mission in life is to teach millions of people that they have unlimited potential and that they can be, do and have anything they want, if they develop the consciousness of already being doing, and having it. In this episode, we’ll discuss the seventh habit (or mindset) in our series since we’ve been talking about the seven success secrets of millionaire entrepreneurs.

In my book, The Ultimate Success Formula, I call it the “be it” principle. I want to come at from a little bit of a different angle right now and considering all of our principles start with the letter C, I’m going to call this principle congruency. Congruency is a very powerful, powerful word that is an extremely important key to achieving anything that you want in life. What it means is that your beliefs, habitual thinking, and your actions must all be congruent. They must all line up in a congruent whole. That’s actually what wholeness means.

The key is simply that you must act as if you already are, have and do. Now, we’ve all heard similar things to this before, but we really don’t understand the power behind it. My first mentors called it “fake it till you make it” and it sounded kind of phony to me, because obviously when you fake something, it’s pretending! I didn’t really understand the power behind that.

So I ended up changing it for myself and called it “faith it till you make it”, but you must understand something… I’ve been studying beliefs and mindset: the conscious, sub-conscious and super conscious mind for over 30 years and have realized that even if a belief is totally false, if persisted in, it will harden into fact. You may be arguing with me saying, “Carlos, that’s not true,” but you know what? It is true, and I’m going to prove it to you right now. We’ve all experienced this, especially in the negative side. We think that the positive manifestation of this law will never happen, but we don’t take into consideration that on the negative side of things, we have all experienced and lived this.

If you’re an individualization of God (understanding that you are unlimited potential and you have unlimited potential) how can you not be good enough? I mean think about that. It’s your belief that you’re not good enough that will limit you and make you “not good enough” in whatever you feel you are not good enough to be, do, or have. Unfortunately some people, instead of just thinking, “Well, I’m no good at drawing. I’m no good at art. I’m no good at music. I can’t sing. I can’t play a musical instrument. I’m just not good in math. I’m just not good in English. I’m just not a good student. I just can’t learn that. I just have ADD. I’m bad at this.” Many people will take the “I’m not good enough thing” and make it a generalization for their entire life, and that ladies and gentlemen leads to humongous limitations. You must admit, you’ve experienced this at some point in time in your life and it has limited your ability to do things. Now it’s time to realize that it’s simply… not true!

You are good enough because you are unlimited potential! You can learn anything. You just may need a different strategy. The bottom line is that you need to take it into the positive side and use this to create the life of your dreams. Believing yourself to be whomever you choose to be and having whatever you desire is incredibly powerful. In our case, we’ve been talking about becoming a millionaire entrepreneur. Believing yourself to be so while holding strong to that belief will in time make it so.

Imagining yourself being so, maintaining your focus and your attention on the feeling of already being it causes you to start acting that way. When we talk about imagining, a lot of the times people equate imagining to visualizing. Visualizing is one aspect of imagining. You can visualize images, you can also have mental conversations, and both of those produce feeling. You can have a contemplative, thinking, planning, strategic, imaginary planning sessions with yourself and produce feelings of achievement.

Imagining is whatever produces the feeling within you that something is already so. If you understand what we’ve been doing here on the show, (I hope you’re starting to put the pieces together) all of the six previous mental states that we’ve been talking about on these shows, (these states, habits and characteristics) integrate to facilitate this seventh secret according to the level of energy and the degree of consistency that you invested in them while we were going through this show, and while you’ve been learning these and making them a part of your everyday life.

You see, congruency becomes: you believe, think, talk, focus, and act like the person that you previously wanted to be. In my story  (the one we’ve been talking about through this, the how I became a millionaire story) integrating the previous six keys was the key to achieving my dream of becoming a millionaire in two-and-a-half years. I created this huge dream, and I depicted everything that I wanted in every area of my life, what it would give me, what it would give my family, what I would be able to do, where I’d live, where I’d travel, what I’d drive, the kind of lifestyle that I would have, and I cut out pictures and put them where I could see them constantly and did all kinds of things to remind myself why I fell in love with my dream.

By keeping my dreams in front of me I fell in love with my business. Thus, I committed 125%, and sold out to the dream. I had full expectancy, I created intention, and then I focused on it morning, noon, and night. I kept looking for greater and better distinctions. I became totally confident and bold, and I daily took creative, productive action towards the attainment of my goal and my dream. I became totally congruent. I started acting as if I already were that person.

That’s what started really creating massive results. I started imagining myself being introduced as a millionaire (it was called “diamond” in the company and business I was in). I imagined myself being introduced as a new diamond, as a new millionaire in this large event that they had every year that over 10,000 people went to. I imagined myself giving speeches on that stage. I got so good at imagining it that while I was driving around in my car going to meetings, I was giving these millionaire speeches. I had organizations in Orlando, Atlanta, and many different places and I’d drive to these places (because I couldn’t afford to fly initially), and I would be giving these speeches for an hour or two while I drove in my car.

I embodied being this person that I desired to be. I started acting as if I already were a millionaire. I started getting people that were way more successful than me, that were making a lot more money than me, listening to me in this business, following me in this business, wanting to be a part of my business, and I was leading all of these people. This worked so powerfully that I just put in the effort with joy. It was playing, not working, but with a total sense of certainty – the total assurance.

See, because of my commitment, I already knew that it was done and all that I had to do was go out and reap the harvest, just harvest what was already mine. I did it with such a sense of certainty that 28 months later I was a millionaire. I tell you (I’ve said it before in these shows) it may seem too easy for you. You may wonder how these mental patterns can produce these fantastic results, but I promise you they do, and this particular key, congruency, is the secret of secrets. The ancients in wisdom philosophy called this secret… embodying the end result, the desire, lining up your thinking, beliefs, actions, everything with your desire… they called it “resting in the Lord.” When you assume the feeling of your desire fulfilled and act that way, it will automatically manifest in the physical world at a velocity that will blow your mind and everybody that has achieved anything great including millionaire entrepreneurs has used this secret.

The degree of your efficiency and effectiveness at using this principle will determine how quickly you will achieve your dreams and goals in life. I hope that this series has helped you, and I hope that you go back and watch it often. Be on the look out next year for a new book that I’ll have coming out that will really jump in to these secrets in depth, but for now, The Ultimate Success Formula shares all of these secrets, just in a little bit of a different language. In my book and programs we’ll show you how to put them to work to produce fantastic results in your life unbelievably fast.

Subscribe to my YouTube channel, if you haven’t already. Share it with others. Youtube.com/carlosmarintv
This 7-part series may be over, but the show isn’t! We will continue next week with another episode of Your Unlimited Life, so until then live your unlimited life and God bless!

Thank you Carlos Marin for taking the time to remind me of this important and underutilized "Secret"! It's trully amazing how we are given such valuable information and we don't act on it. It is that simple! You have been saying it for so long… Please don't give up on us Carlos. Please continue, you know people are different every day and one day it's going to "make sence" and say " How come no one told me this before?" Every time I hear you I get re-energized and go at it again. Love you guys!

Following you also on English language. I am a multillionarie entrepeneur. Thanks to Carlos Marin and Cecy Marin. I am good enough in all life areas that I focus. I am acquiring unlimited results. I maintain my focus on feeling I am a multimillionarie entrepeneur and businessman. I integrate all this Carlos Marin thinking beliefs to my life. Thanks about all. Every day I remember and meet with my customers I think, do and act as a multimillionarie and entrepeneur with quality, time and budget on complete satisfaction. Constructing my unlimited life. Thanks.