How Self Made Millionaires Think 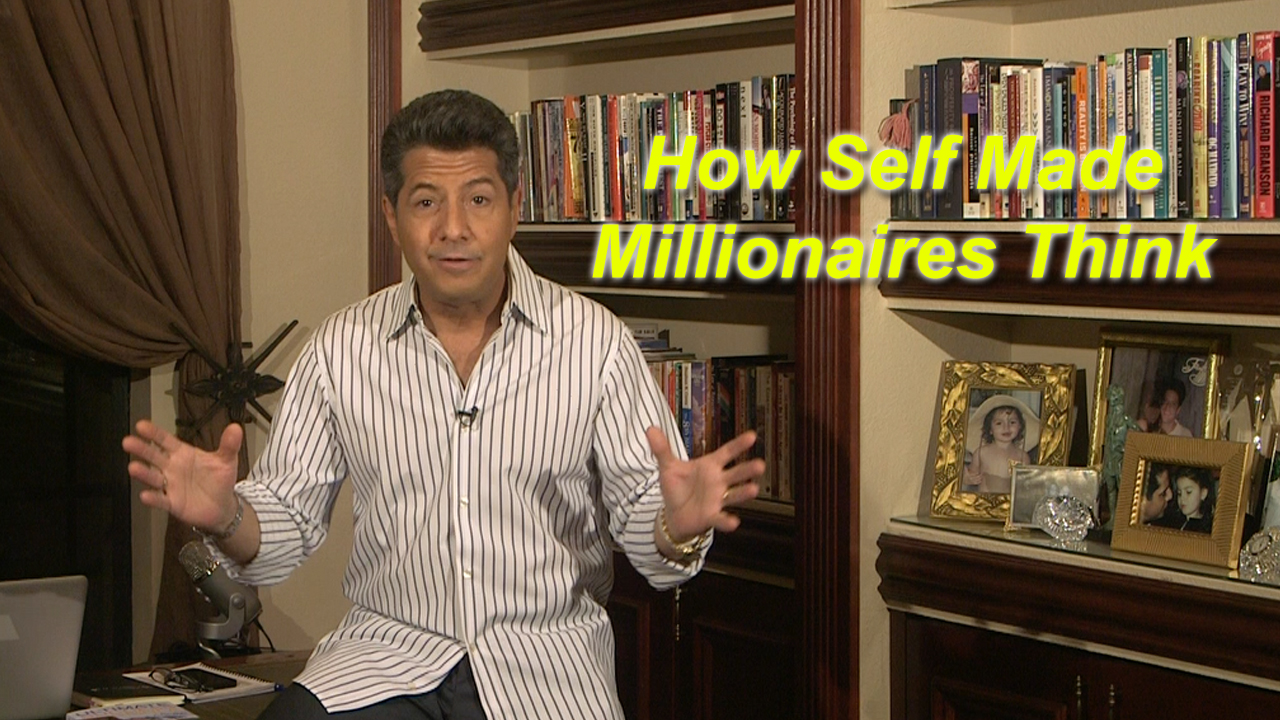 Welcome to another episode of Your Unlimited Life. I’m Carlos Marin, author of The Ultimate Success Formula. Welcome to a brand new beginning! We have invested six weeks of studying motivation from all different aspects. (What creates it, what sustains it, and what magnifies it.)  I have been preparing you for a critically important topic. This is a great time to talk about it, because for most of you are just starting a new year. (Coming off of your vacations, your holidays and everything else.) You’re a couple of weeks into the new year and we’re going to really jump into something that’s really important for most of you. I think that one of the things that most entrepreneurs and business people really want to do is that they want to get to a new level of success, that level of financial freedom, that thing which we call being a millionaire.

I’ve got to ask you a question: Is it okay if I taught you how to think like a millionaire? I look around and I think that there’s a lot of people stuck on obstacles in life and they think that there’s this big mystery about it, but to be honest there really isn’t. There really is a special way to think that produces the types of results that millionaires get. Now, understand something, Millionaires come from many different types of backgrounds. You can’t just pigeonhole them all into one category or say they all did it this way, that way, or the other. There is a way of thinking; there is a certain belief system (or mindset) that produces this kind of results. Millionaires come from many different nationalities. Many educational levels; some are college graduates, some are high-school graduates, some didn’t even graduate high-school, some have doctorates, and some don’t even know what a doctorate is. They come from many different types of backgrounds, many different education levels, many different types of businesses (from service businesses to internet businesses, to network marketing businesses. Many different directions.) They come in all shapes and sizes (tall ones, short ones, fat ones, skinny ones, good looking ones, ugly ones.) They have all different kinds of personalities, different temperaments and different styles. You have some of those “A” type driver personalities while some of them are so laid back that you go, “Oh, my goodness!” Some of them are sharp and well-dressed, and some look like they just got off the farm. There are huge differences between them but there are also a lot of similarities. What I want to share with you is the similarities because those are the things that will help you understand this critical topic and help you get into that position for yourself.

Understand, some of these people are really organized. They’re really anal, OCD almost, and others, they’re just so flexible, everything rolls off of them like water off of a duck’s back, and they kind of fly by the seat of their pants. They’re more flexible. They like the kind of surprises that the days bring. While others are on top of it all the time! They have lists, and they have everything planned out. Some are people persons. They socialize, they love to hang around people, they’re talkers, they’re team builders. They thrive on being around other people. Those are the types that build sales organizations, and those are the types that head a lot of big organizations that require a lot of teams, and team building. There are some, though, that are loners. They fly solo. They’re creative individuals and they like to work alone. (Not saying that they don’t fit in on teams at times, but they prefer to work alone.) They like to do things on their own. I’ve found it is sometimes harder to become wealthy when you’re not a people person. It is easier to become rich and wealthy when you are a people person because people are the salt of the earth and they are what make life interesting and fun. But you know what? There are some people that are antisocial and they’re very, very rich. They like to sit at a computer. A lot of those people work in trading stocks or trading currency, that sort of thing.

When we get into the things that they all have in common, they all seem to be in some way, shape, or form, self-reliant. They take responsibility and ownership for their life and results. It’s like the buck stops here. If you got to find fault, if you must come pick a bone with somebody, come pick it with me. The buck stops here! They’re self-reliant, and whether they’re these outgoing people types or loners, they’re self-disciplined. They are self-starters. They do not need a lot of guidance and they are self-motivated. They take the responsibility for their own motivation, for their drive and their discipline. They don’t need a lot of pushing or prodding.

One of the major key beliefs that they all have is simply that serving other people is the key to success. They understand that there’s only one of them and billions of other people in this world. They understand that the more people they serve, the more people that they can help get something they want (something that they need or something that they aspire to have in life) the more successful that they become and the more wealth that they will create. They are also, in a great degree, the type of people that believe that problems contain the seeds of a greater benefit. They’re the types of people that believe, “the bigger the problem, the better the solution, the greater the reward.” They believe that problems and needs come with their own solution, that they naturally contain their own solution.

These self-driving people are continually looking for improvement, for growth, expansion, and they believe that every problem brings with it, not only a seed of a greater benefit, but also a solid solution. They are believers in lifting people up. They believe if you lift people to a newer level of ambition (newer levels of aspiration) that people react and respond. They believe that sometimes people don’t exactly know what their problems or their what their true needs are, but when you show them something that really raises their level of ambition (and lifts their level of aspirations) that people respond to that. Facebook has done it! People didn’t know that there was such thing as social media until Facebook came along and said, “Hey, here’s an easier, quicker, faster way to socialize and even to socialize with people all over the world!” and people responded with, “Hey, I’m in!” Look at what’s going on today. Over a billion and a half people are on Facebook. Over a billion people log in every single day. Think about that.

Another great thing is that they all believe that the greater value they give, the greater the reward. To give greater value means to receive a greater income. The more value you give to other people, the greater wealth that you create for yourself as well. This is a key element! They’re value givers. They’re not takers, they’re givers. That’s what people don’t understand at times. Millionaires are givers. They also have this belief that “if it’s to be, it’s up to me”. Not that they have to do everything, but that they are the driver (the catalyst). In some cases, they do believe they have to do everything, but even people that lead large teams also have this belief in themselves and belief in their ideas. They have this mindset, (like Napoleon Hill said in Think and Grow Rich) “Whatever I conceive and believe, I achieve.” They have that kind of mentality. They have persistence, consistence, “never say die” mentality, that speaks out and reminds them that, “There’s always a way if I’m committed and persistent.” They tell themselves, “I’m responsible for my results and my life.” They also feel that they have to control their attitude and their mind. They have to control their thinking. “My attitude in life determines my altitude in life.”

Next week, we’re going to talk about the most powerful characteristics and mindsets that these millionaires have, so that you can start modeling this and utilizing this as a road map that will to take you where you want to go.

As always, share this show with five people you love, five people that you know want to be millionaires. Share the love and help me on my mission to empower millions of people around the world to know their true power and greatness, be free, and live their highest vision in life. Remember, one million millionaires by 2021. Subscribe to my YouTube channel and share it with others so you can watch all of these shows in one central location free and easily every single week. http://YouTube.com/carlosmarintv .
Until next week, live your unlimited life and God bless!