There’s 3 Sides to Every Story 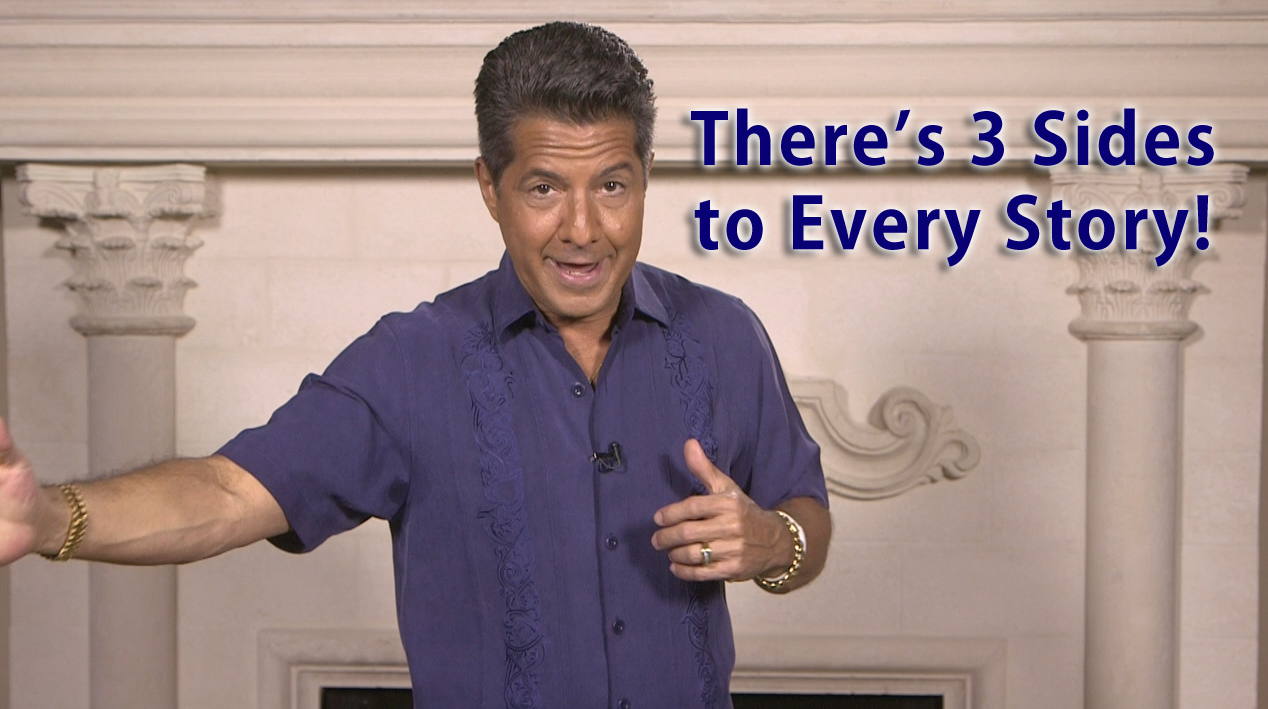 Welcome to Your Unlimited Life. This is episode number 33! We’ve been at this for over half a year. I’m Carlos Marin, author of The Ultimate Success Formula, and today I have a very important question for you. If I asked you, what is reality? What would your answer be? I’ve been asking this question to people for over 25 years and most people answer in a similar fashion. They say that it’s what they can see, the world around them, what they can hear with their ears, what they can see with their eyes, what they can touch with their hands, what they feel with their feet, what they can taste with their mouth and what they can smell. They look at it as if reality is only the result of the world around them. Now, that’s only partially correct, because that is a segment of reality. But really, there are actually two different and distinct types of realities. That first one that we talked about is perceptual reality. It’s what you can perceive with the senses. This perceptive reality or perceptual reality is relative. It’s relative because it’s based upon the relationship between what you perceive in your mind and another external object. Sometimes it’s even what you perceive in your mind about yourself (your physical self, your abilities, your talents, your skill) but it’s always relative. It’s always positioned as viewing something else that is considered external to itself, an object.

Perceptual reality can be very elusive, because it can change continually based on how you look at the topic or the object, what vantage point you’re looking from. It reminds me of that movie, I think it was called Vantage Point, where there was an attempt made on the president of the United States’ life. There were eye-witnesses (it was at a speech or something) that recounted what actually happened when that attempt was made on the president’s life. But see, one of them was over there, one of them was over here and the other one was over there, because they were all in different positions. Based upon what they saw from the position that they were in, (because some things were in view, some things were excluded from view) they each came up with a different scenario about what actually happened, and in the end you saw what actually happened in the movie. I won’t take away the thunder, it was actually a very good movie. In reality, what all of them saw was their own perception, and what actually happened was quite different from what any of them saw. That’s the case with perceptual reality. It’s all based on perception. A relationship between what you’re thinking, what you’re seeing, the meaning that you’re giving it, and something that is actually going on or might not be going on. It might all be in your mind. I’ve told people for years that there are three sides to every story. When people disagree we say, “Oh, they just aren’t seeing eye to eye.” It really means they’re having different perspectives about a topic, an idea or an experience.

Building marketing networks and large sales organizations for 30 years, one of the things that I’ve had to do is counsel thousands of people on a multitude of different topics. I’ve counseled people when leaders were struggling and fighting with each other, getting territorial and trying to push their weight around. I’ve helped with disputes between associates, even disputes and arguments with married couples. You know what I’ve seen? I’ve seen that all disagreements were because of differences in their perceptions. It was all because they saw the “truth” differently, and that caused them to not be able to communicate effectively with each other. In each person’s story (in other words, their perception) they were right and the other person was wrong. The argument or fight was over the disagreement in perceptions. Here’s the interesting thing, each person felt that they were right due to their belief in their perception, because that’s really the key. When you believe strongly in your viewpoint, it becomes your reality. Here’s why I say there’s three sides to every story, because when people are disagreeing, somewhere between side A and side B, somewhere in the middle, or maybe even closer to one side than the other, is what actually happened. Just like in that story I related to you about Vantage Point. Somewhere in the middle of all the stories everybody told was what actually happened, was the “truth.” But to each one of them, they believed their truth or that their perception was the truth, and the other person’s perception was a lie. That makes it very difficult to create a harmonious situation in any context that you’re looking at it.

When you’re dealing with it in yourself, it is equally difficult, because what you perceive to be true becomes a reality that you live. It’s true to you, it determines what you will see, what you will hear, what you will feel, and those things will determine what you will attract into your world. Perceptual reality can be a very powerful thing when used consciously, because with it, we can change our beliefs on purpose, which will change your world. When I started out in business (you’ve probably heard parts of my story if you’ve watched some of my shows before) I had this perception of being a victim. That is kind of the role that I lived at the time. I felt that others were at fault for my problems, that it was the government’s fault for the inflationary economy that we were living in at that time, that it was the government’s fault for the energy crisis that we were living at that time. (Yes, there was an energy crisis back then too, in the late 70s, early 80s.) I was blaming my lack of success, lack of money and lack of wealth on external situations and circumstances. I had the mentality that certain people were out to get me and I had that mentality because I hung around other people that had that mentality, and because their perceptions were that, my perceptions became that. I lived that situation because of my perception of reality. That caused the reality that I was living, in other words living in lack (living in lack of wealth, living in lack of success, living in mediocrity) until I changed my perception of reality.

That came about when I made a commitment to my own success, and I took a 100% responsibility for my life and results. I realized that nobody was in charge of my attitude except for me. I realized that no one could control my thinking or my life.  I realized that if I looked at things from a positive aspect and took responsibility for my life, (considering my negative thinking and victim mentality created the poor results that I had and the situation that I was in before) then my positive thinking as well as my positive attitude and acknowledging the 100% responsibility in my life, my success, my results and my wealth could create that for me. That’s exactly what happened. I took 100% responsibility for my life, and just like that, things started changing. I started increasing my level of success and success grew upon success. Just like it spirals downward when you have the mentality of a victim, it started spiraling upwards when I had the mentality of success as well as the mentality of wealth. All of a sudden, the results stacked one on top of the other until automatically, I started producing those results. What changed? Only one thing changed, my perceptions. My perception about what reality really was changed everything. My beliefs changed, and my results changed.

In next week’s show, I’m going to cover the second type of reality, which goes hand-in-hand with this one, but it’s very powerful because with that second type of reality, you can direct your own perceptions, which will transform your life in order to help you live your most cherished dreams. That is the reality, the “power” reality. I’ll just leave you with that clue, but that type of reality has the power to change everything and well as to transform things literally overnight. Share this show with five people you love, people that you want to help transform their lives and live in success, wealth, and happiness. Share the love, join our mission to empower millions of people, to know their true power and greatness, be free and live their highest vision in life. If you haven’t already, don’t delay, go subscribe to my YouTube channel and share it with everyone you know so you can all watch these shows in one central location, free and easily, every single week. It’s http://youtube.com/carlosmarintv.

So until next week, live your unlimited life and God bless.

Nice post. I was checking constantly this weblog and I’m inspired!

Very useful info specially the closing part :) I maintain such information a
lot. I was seeking this particular information for a long time.
Thanks and good luck.